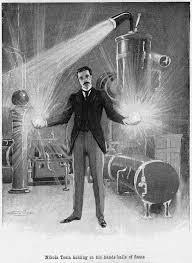 1891
It is notable, that during the early study years of Nicola Tesla [inofficially born on Austrian Empire] on 'matter' (~ 1891 ; in connection with transmission of electrical energy without wires), in the same year Austrian Sigmund Freud officially laid the ground for his so called "Psychoanalysis". I'm pointing out for some years now, that Psychoanalysis was/is in reality some militarized psyOP competition-front against peaceful 'philosophy', *also to pave the way for a 'mindOP-merge' between some specifications of eugenic BioPharmacy (Defense-) Industry and Chemical Warfare during WW1 (~ 1915) incl. a pseudo treaty against it.
https://ff.im/7qgNS
https://en.wikipedia.org/wiki/Geneva_Protocol

Some historians figured, that US citizen Dr. Anton Casimir Dilger, helped for the "biological sabotage on behalf of the German government". Dilger was the son of Hubert Dilger (American Civil War).
https://en.wikipedia.org/wiki/Anton_Dilger
--- Tesla furthermore contributed in varying degrees to the establishment of robotics, remote control, radar and computer science, which could back up my other older thesis, that one of the *real reasons* for WW2 was the development of the Computer [Konrad Zuse]/Holorith Machine, furthermore the improvement of Color Movie, the first constructions for a VideoRecorder System [later known as UMatic '69/US Release: '71], plus the very first test simulations of the Internet, incl. hypothetical protocol emulations (=not actual executions, but tested simulations) for any kind of unconventional weaponry incl. early antimatter ['weaponry'] calculations.
Historically one of the main reasons of the Internet, was indeed based on ideas by CERN's Internet Exchange Point, CIXP: to attach on every data string invisible 'paralell informations', to use data packets as 'robo-calculators' for physical string analysis. Therefore IBM, CocaCola and SONY are in my top list, as potentially having been the actual sponsors of WW2, incl. the calculated attacks on Japan, to prepare additional slush fund for them.

PS: Freud was influenced by french neurologist Jean-Martin Charcot, who had some military background. He worked at the famous Salpêtrière Hospital, which was formerly a gunpowder factory, then also a large prison for prostitutes. Salpêtrière is furthermore linked to a huge wave of mob violence, in late summer 1792, during the French Revolution; and ironically also linked to the death of Lady Di, former Princess of Wales. See https://en.wikipedia.org/wiki/Salp%C3%AAtri%C3%A8re ;
(see also 'The OSS-Tavistock MindControl Cult- 9/11 Truthling Infiltration Timeline' https://bit.ly/JyvI)