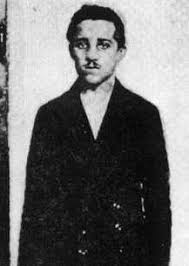 
1914–1918
World War I. Officially it started with Gavrilo Princip's assassination of Archduke Franz Ferdinand of Austria.
The gun used by Princip is a Browning M 1910 semi-automatic pistol in 7.65×17mm (.32 ACP) caliber.

Officially "a second bullet fired by Princip", kills Ferdinand.
Most historians agree that Princip was a member of Young Bosnia and that the group got its weapons from the Black Hand (???? ???? [sic: russian font sp./Crna ruka). However, Princip had minimal contact with the group, and did not associate with them.
Princip is captured after some apparent suicide attempt and dies of tuberculosis on 28 April 1918 at Theresienstadt (a place which later became infamous as a Nazi concentration camp).
https://www.economicexpert.com/a/Gavrilo:Princip.html


July 1917
Mustard gas is first used effectively in World War I by the German army against British soldiers near Ypres.
https://qanda.encyclopedia.com/question/mustard-gas-introduced-into-warfare-215926.html


1919
The Waldorf School Concept starts in Germany, which is the most visible activity of Anthroposophy, an occultist sect founded by Rudolf Steiner (1861-1925).
Former Waldorf School Members state that they discovered a "rigid, authoritarian environment that seemed to be rooted in a medieval dogma".
The name Waldorf comes from a cigarette factory in Stuttgart which hosted the first school.
According to Historians, Emil Molt was the director of the Waldorf-Astoria-Zigarettenfabrik, named after Johann Jakob Astor, prominent member of the Astor family.
The Waldorf-Astoria tobacco brand, was later taken over by a different company and is currently produced by Reemtsma [subsidiary of Imperial Tobacco, the world's fourth largest international tobacco company, sitting in UK  ;
Philipp F. Reemtsma was part of the National Nazi Socialist economy and known as Wehrwirtschaftsführer from Hermann Göring ;
Johann Jakob Astor is buried at the Trinity Churchyard Cemetery in Manhattan, New York.
It's located at 74 Trinity Place at Wall Street and Broadway.
https://books.google.com/books?id=T-ty5v_FtmMC&pg=PA119&lpg=PA119&dq=74+Trinity+Place+evan+fairbanks&source=bl&ots=eQjkrf_cwH&sig=2R1weWthanepM7DOtwyDiC6fiWc&hl=en&ei=yHfbSqegNMrQ8Qb7gYW3BQ&sa=X&oi=book_result&ct=result&resnum=1&ved=0CAwQ6AEwAA#v=onepage&q=74%20Trinity%20Place%20evan%20fairbanks&f=false].

The Waldorf Ideology is a popular variation of the burgeoning Nazi Aryanism.
Holding to a form of creationism, the Aryan race theory claimed a seven step process of human evolution in which successive races evolve from a lower to a higher form of life.
One of the current most prominent scholars of the Waldorf Education system is Jens Stoltenberg leader of the Norwegian Labour Party and the Prime Minister of Norway.
https://en.wikipedia.org/wiki/History_of_Waldorf_schools
https://en.wikipedia.org/wiki/Emil_Molt

[Addendum regarding Trinity Church: On the morning of 9/11, Evan Fairbanks, a photographer, is in the studio of Trinity Television with the Archbishop of Wales, Rowan Williams, now the Archbishop of Canterbury, when he learned from the attacks.
Ironically he stated, though having his own camera, that "someone handed [him] a camera", while he was on his way to allegedly capture the pending 2nd attack on the Twin Towers.
As seen on some footage, he is shooting in front of the Burger King at the Corner of Church and Liberty.
His footage is later officially confiscated by the FBI.
It turns out, that is then copyrighted by a company,
which is ironically also linked to the rights for the filming of the 1945-liberation of Bergen-Belsen,
officially organized by the British Army Film and Photographic Unit (AFPU)

[set up in October 1941 ; https://forum.axishistory.com/viewtopic.php?f=54&t=151223].
The name of the british photographer George Rodger, who became famous for capturing Bergen-Belsen, was George Rodger (1908 - 1995). After working with Life magazine from 1945-1947 he is being invited by his friend and famous photographer Robert Capa to be a co-founder member of Magnum Photos picture agency in 1947.---

[Fast Forward:  As it happened a lot of photographers from the Magnum agency were *actually in New York on the Day of 9/11, including Paul Fusco, Thomas Hoepker, Steve McCurry, Susan Meiselas, Gilles Peress, Larry Towell and Alex Webb, because their annual meeting was the night before at the agency's office in Chelsea.
https://en.wikipedia.org/wiki/User:Noahcs/Fairbanks_video ]