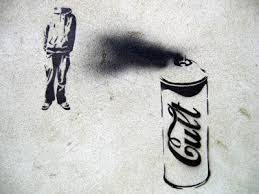 1980s
The word "cult" becomes hip in germany ("KULT") and is getting linked to "cult movies", "cult bands" or "cult authors."
During the same decade, traditional pseudo-religious cults are getting more accepted, among them Bhagwan aka Rajneesh Foundation International, which also created the german Bhagwan Discotheques.
In 1981 Founder Bhagwan Shree Rajneesh (1931 - 1990) is getting deported from Oregon under a bevy of serious criminal charges associated with his ashram, or spiritual community.
In 1984 Members of the Bhagwan Shree Rajneesh cult contaminated salad bars in 10 U.S. Restaurants.
The Bhagwan means ''the embodiment of God''.
Later he took the title, ''Osho Rajneesh,'' a Buddhist term meaning ''on whom the heavens shower flowers.''


80s
The Muhjahadeen, Afgani "freedom fighters"  who battled the Soviet Union for control of their own land, were armed by the CIA and supplied with funds scammed through the BCCI and the CIA's Cali-Medellin Cocaine Cartels drug sales and Contra money-laundering operations.
The BCCI Credit Institute was founded and directed by e.G. former CIA director Richard Helms.

1982
Orbital Sciences Corporation is founded in Dulles, Virginia, which specializes in satellite launch and manufacture. In 1997 Orbital will sell ORBIMAGE (now GeoEye) and the Magellan line of GPS receivers (the latter to Thales).

1982
First Biopharmaceuticals produced using biotechnology are getting circulated.
The first such substance approved for therapeutic use was biosynthetic 'human' insulin made via recombinant DNA technology. Sometimes referred to as rHI, under the trade name Humulin, was developed by Genentech, but licensed to Eli Lilly and Company, who manufactured and marketed the product starting in 1982.

January 1982
Popular Science Magazine releases a cover story about "Beam Weapons".
The article states that "space-based lasers or particle beam devices could kill enemy missiles almost instantaneosly".
Wyoming Senator Malcolm Wallop, who favors speedy development:
"Actual physical pieces of the system already exist. Only the money and the will to put them
together is lacking".
Of three systems tested, only the TRW laser has direct application to space.
"Chemical Lasers are well suited to space because they need no electrical hookups.
Because the beam results from chemistry, not from the sudden discharge of a capacitor-battery system, it can be fired in rapid, single-shot bursts, or be left on until its fuel is gone."
DARPA's leading chemical laser for space deployment is called Alpha, a device forecast to produce five-megawatt pulses of 2.7-micron laser light using a four-meter glass mirror.
It is thus the basis for a mythical weapon called "5/4".
Alpha is under development at TRW and Rockwell's Rocketdyne.
The Talon Gold equipment, under development at Lockheed Corp., will be tested aboard a military manned Space Shuttle mission in 1985.
Space-weapon activists in Congress and Industry want a Manhattan Project-type commitment to have a laser picket-line operating by the eary 1990s.
They say such a priority is justified because the Soviet Union is far ahead of the U.S. and has already demonstrated one laser in space.

1985
General Motors acquires Hughes Aircraft Company, which will eventually be sold to Raytheon in 1997 and Hughes Research -Laboratories became jointly owned by Boeing, GM, and Raytheon. -

Sensis is receiving prime contracts for the ASDE-X air traffic control system which is used by the FAA at 34 US airports. ASDE-X is able to "pinpoint the locations of aircraft and vehicles on the airport surface and airspace". During 2000, Sensis is also becoming part of the FCS contract teams, to specialize in "geospatial operations".
According to their website, Sensis has also a department in Australia, called Sensis Technologies Pty. Ltd., located in Melbourne. https://en.wikipedia.org/wiki/Sensis_Corporation
https://jobs.careerone.com.au/texis/company?compid=4706055142a20
Sensis Pty Ltd is actually specialized "as an information service provider".

...During 2002, obviously some merger with Tessamen Pty Ltd aka Pacific Access Pty Ltd. occurs, which creates the brand name Sensis in Australia. Sensis, now in conjunction with Hewlett Packard, starts to work on the Whereis Navigator service, which is released in 2005. Among other main activities is now also the Telstra Directory Assistance. Sensis also publishes Australia's White Pages and Yellow Pages telephone directories https://en.wikipedia.org/wiki/Telstra
With help of Telstra or Telstra Corp., also based in Melbourne, they become the largest provider of DSL and cable internet access in Australia. Up until its privatization in 1993, Telstra was actually still known as Telecom Australia. In 2008, a major project between Google and Telstra subsidiary Sensis is promoting the integration of data from Yellow Pages business listings into Google Maps Australia; https://www.gizmodo.com.au/2008/11/sensis_and_google_join_forces_to_create_mega-google_maps.html

NOTE: There is further confusion with the history of the name Sensis. In April 2007, Textron Inc. receives a FCS contract, but was already linked in 2003 to a FCS contract by Overwatch, Tactical Operations, which is also linked to a company called "Sensor", but partners also with Analysis & Technology Australia Pty Ltd. https://sensor.com/ow_partners.html https://www.ataust.com.au/
Sensor.com originally describes its focus on 2D/3D Mapping and 3D scene visualizations. New York's Sensis is apparently also not connected with the californian company Sensis Agency, originally starting in 1998 as "Focus Multimedia", which ironically represents the U.S. Army, The Walt Disney Company, FOX
https://en.wikipedia.org/wiki/Sensis_Agency


1985
Petra Kelly is responsible for the 1985 relaunch of some apparent "TIBETpsyOp", a carefully designed 'reality tv program' of CIA puppet Dalai Lama. TIBET_OP is one of many, which obviously was created to keep masses of leftwings busy, looking into other directions, while i.e. the production of Directed Energy Weapons was heavily ignored. Kelly initiated debates on the matter of 'Tibet' in the German Bundestag, together with Herbert Rusche, who has himself yet another obscure bio: Rusche converted during 1977 from Evangelism to Buddhism and then opened the first bio store in Offenbach.
see also friedrich naumann institute
[see original timeline and sources at "The distraction psyOPs around the History of DEW + Co. [by ewing2001)" https://ff.im/v9cN ]

1985
In the same year former CIA advisor Erkin Alptekin, who has worked for the CIA's Radio Liberty, participates in the foundation of the "Allied Committee of the Peoples of East Turkestan, Tibet and Inner Mongolia".

https://ftrsupplemental.blogspot.com/2007_09_24_archive.html
Conclusion: If Otto Schily operated as some actor in a scheme and Petra Kelly was a dupe for the CIA, as some huge 'alternative energy-/eco distraction' psyOP, then obviously this was also done to distract from a huge Directed Energy Weapon program of the U.S., China and Russia. In hindsight we know that any related topic on that matter morphed into some bizarre 'free energy' lingo usually ending up in the hand of misled newage- or ecology groups.


1986
As part of the SDI
architecture, the command’s largest directed
energy program is the ground based free
electron laser (FEL) technology integration
experiment.


1986
Afghanistan: Bin Laden brings in engineers from his father's company and heavy construction equipment to build roads and warehouses for the Mujaheddin.
Then he helps building a CIA-financed tunnel complex, named Tora Bora, to serve as a major arms storage depot, training facility and medical center for the Mujaheddin, deep under the mountains close to the Pakistan border."

1988
Sen. Clairborne Pell (Member of the CFR and the Club of Rome) introduces a bill to get government funding for the new age group the "National Committee on Human Resources" (Al Gore was a co-sponsor).


1988 to 1991
Dr. Lawrence R. Greenwood becomes general manager at the General Electric Astro Space Division. Greenwood was also former president of Nichols Research Corporation, an SDI sub-contractor. Nichols Research is later sold to Computer Services Corp. (CSC), the parent of DynCorp. Greenwood is also chairman of the board of directors at Teledyne.